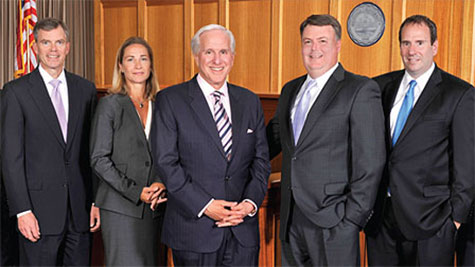 BOSTON, MA — Recognized nationally as one of the country’s leading medical malpractice and catastrophic personal injury law firms, Lubin & Meyer PC is pleased to announce the inclusion of 5 attorneys to the 2018 Best Lawyers in America® list. They are as follows.

Firm founder, Andrew Meyer, has been recognized by Best Lawyers each year since 1995. He is widely recognized as one of Boston’s top lawyers and an innovator in medical malpractice and personal injury law. Meyer has consistently achieved record-setting verdicts and settlements, including one of the largest personal injury awards in Massachusetts' history — $30 million including interest. He was named Boston’s Medical Malpractice "Lawyer of the Year" by Best Lawyers in the 2011 edition.

Robert Higgins, has been recognized by Best Lawyers since 2008. Higgins who was named Boston’s Medical Malpractice "Lawyer of the Year" by Best Lawyers in its 2015 edition is recognized as one of the most successful trial lawyers in Massachusetts. He has the distinction of having achieved the the state's largest medical malpractice award — a $40 million verdict for a baby brain damaged at birth.

Krysia Syska and Adam Satin have joined Meyer and Higgins on the Best Lawyers list of medical malpractice plaintiffs lawyers since 2012. Each having achieved record-setting verdicts and settlements. For Satin this includes a $5.83 million verdict for the family of patient who died after his physician discontinued an aspirin regimen, and a $3.5 million judgment for the mother of a 12-year-old boy who died after an ER doctor delayed transfer for treatment. Syska's achievements include a $5.65 million birth injury settlement for failure to properly monitor a fetus during delivery, and a $5 million settlement for a baby's injuries sustained when a nurse and midwife failed to act on signs of fetal distress.

William Thompson, who has been listed by Best Lawyers in the area of Personal Injury Litigation since 2010, also has obtained numerous multi-million dollar awards for victims of medical negligence, including an $11.48 million jury verdict for the death of an 8-day-old twin.

Best Lawyers, universally regarded as the definitive guide to legal excellence, has published its peer-review list for more than three decades, earning the respect of the profession, the media, and the public as the most reliable, unbiased source of legal referrals.