Cover story from Best Lawyers New England
Featured in the Boston Globe, May 2015 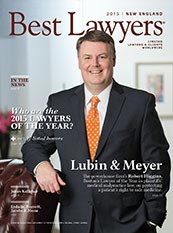 Lubin & Meyer partner Robert M. Higgins was featured on the cover of the recent Best Lawyers New England, an annual supplement to the Boston Globe. Higgins, who was selected by Best Lawyers® as Boston's 2015 Lawyer of the Year for Medical Malpractice Law, is also featured in a cover story that highlights Lubin & Meyer's advocacy on behalf of the victims of malpractice and the improvements the firm's work has had on the way medicine is practiced.

Safeguarding A Patient's Right to Secure and Reliable Medicine

The feature article describes Higgins and his colleagues as relentless advocates for the rights of injured patients. "By calling for a better standard of care, they have exposed the lack of quality treatment available at many institutions and, in the process, helped create safer hospital environments."

One example given: A lawsuit uncovered a flaw in a Boston hospital’s computer system that had allowed medical professionals to overdose a patient, resulting in her death. Now the hospital has new protocols and has instituted a backup system to safeguard against a similar tragedy.

Lubin & Meyer has also obtained some of the largest medical malpractice and personal injury verdicts in state history, including a record-breaking verdict of $40 million for the family of a boy born with severe brain damage. In 2014, the firm achieved an unprecedented five of the eight largest verdicts in the state, as reported by Massachusetts Lawyers Weekly, as well as 25 million-plus dollar settlements.

“The fact is, medical mistakes are endemic to our health care system, they are one of the leading causes of death in this country, and as a firm, it is not only our mission to achieve maximum compensation for our clients, but also to ensure patient safety for the general public.”

“Improving any system requires change, which in turn requires leadership, and that is where we excel.”

“Robert has earned such a high level of respect among other leading lawyers in this field because of his consummate professionalism, integrity, and abilities. The tenacity he brings to his cases and his unparalleled track record serve as benchmarks for all the attorneys at our firm.”

Meyer was also name a Boston Lawyer of the Year for Medical Malpractice in 2011.