November 7, 2019 — Lubin & Meyer personal injury lawyer William Thompson filed a negligence lawsuit yesterday on behalf of a Charlestown woman who suffered a broken skull and other injuries when a metal railing fell on her from above. Kimberly Frawley, 36, was walking with her 38-year-old husband and their dog on the morning of July 25 this summer when her life changed forever. The lawsuit claims the construction contractor preparing to replace the roof of 85 Atlantic Avenue in Boston's North End was negligent in securing a safe work area. 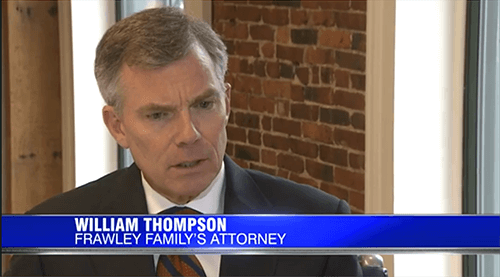 "Kimberly has had a very difficult road as you can imagine. She has had to deal with skull fractures, facial fractures, fractures to her neck, which required multiple surgeries. The clients really want some accountability, to make sure that something like this doesn't happen to anybody else.

Mr. and Mrs. Frawley are the ones who were injured and face a very difficult future, but anybody walking by was subject to being injured by these contractors not following basic safety precautions."


Video news report: Boston personal injury lawyer William Thompson, of Lubin & Meyer PC, describes the injuries and basis of the lawsuit filed on behalf of his client in this 7NEWS coverage.

Background on the Accident

This high-profile accident received a lot of media attention when it happened in July of 2019. Below is some of the coverage at the time the orginal injuries were sustained.

'Just terrible, terrible luck': Woman is in critical condition after being struck by falling railing
The Boston Globe, July 25, 2019

If you have questions about a possible personal injury claim, Lubin & Meyer can review your case for free.