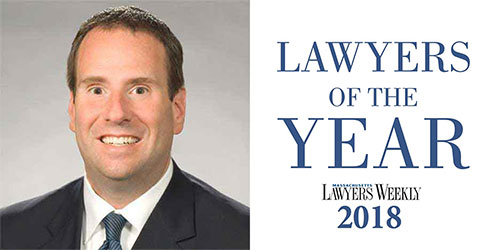 Adam R. Satin, trial attorney for personal injury law firm Lubin & Meyer PC, has been selected by Massachusetts Lawyers Weekly editorial staff as a "Lawyer for the Year" for 2018.

Satin, whose practice is focused on medical malpractice and general liability litigation and appellate issues, drew recognition from his peers this past year for an especially impressive series of courtroom successes.

Within the first seven months of 2018, he won three consecutive medical malpractice trials:

$6 Million Verdict for family of wom­an who died following hernia surgery at Winchester Hospital, which included a rare finding of "gross negligence." (May, 2018)

Satin also successfully defended on appeal the jury verdict in Larkin v. Dedham Medical Associates, Inc., 93 Mass. App. Ct. 661 (2018) in which he defeated the claim of a physician’s practice group that it was entitled to a $20,000.00 cap on damages due to its “charitable” status, leading to the judgment in excess of $33 million being affirmed.

Satin has been a partner with Lubin & Meyer since 2004. He is admitted to practice law in Massachusetts and Rhode Island.