Year after year, Lubin & Meyer is recognized for the consistency of its results and the unparalleled excellence of its legal team.

Every year for the past two decades, Lubin & Meyer has been selected for inclusion in The Best Lawyers in America, and 2016 was no different — for the fifth year in a row, five of the firm’s partners were named in the publication: Robert M. Higgins, Andrew C Meyer Jr, Adam R. Satin, Krysia J. Syska, and William J. Thompson. 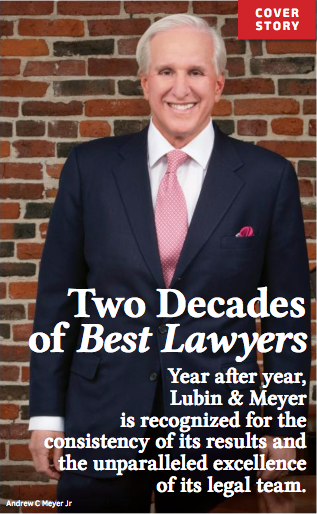 “No amount of financial recovery can ever compensate an individual or family for a catastrophic injury or the loss of a loved one, but we strive to bring some solace and comfort to those who seek our representation, and in doing so, hopefully change the system for the better.”
— Andrew C. Meyer Jr.

These listings, along with the firm’s 2016 Tier 1 Boston ranking for plaintiffs’ medical malpractice law and personal injury litigation by U.S. News — Best Lawyers “Best Law Firms,” represent a continued vote of confidence by the legal community, as they are based entirely on peer review.

“It’s gratifying to know that we have earned such a high level of respect among other leading lawyers in this field, but any recognition we receive as individuals is really a credit to our effectiveness as a group,” says Meyer, a founding partner and Best Lawyers’ 2011 Boston “Lawyer of the Year” for medical malpractice.

“More than anything, our unparalleled track record is the result of the consummate professionalism, integrity, and abilities of our team of lawyers and support staff, and of the tenacity that we as a firm bring to every case that we take on.” Year after year, Lubin & Meyer’s dedication has resulted in recoveries that figure in the top 10 largest verdicts and settlements in Massachusetts. The number of verdicts and settlements the firm has achieved during the past decade far exceed the results of any other firm in the state.

“We have a wide variety of people in our office who offer a range of expertise,” says Meyer of the firm’s team, which in addition to experienced lawyers, nurses, and physicians includes administrative personnel, computer programmers, an economist, and a quality control manager. “By contributing their skills, they have allowed us to achieve the great success that we’ve become known for.”

Indeed, the firm’s track record so far in 2016 is proving similar to previous years, in that the firm has already secured what will undoubtedly be one of the year’s top verdicts—a $29.8 million award by a Hampden Superior Court jury for an 11-year-old girl who suffered a devastating brain injury at birth.

“This was a case where negligent care resulted in permanent injuries, and unfortunately these types of medical mistakes are endemic to our health care system,” Meyer says. “Medical errors are one of the leading causes of death in this country, and as a firm, it is not only our mission to achieve maximum compensation for our clients, but also to ensure patient safety for the general public.”

When Meyer formed Lubin & Meyer in the mid-1970s, the firm was one of the first to take a stand against health care providers on behalf of consumers. From then on, it has continued to fight hard to improve systems within hospitals and doctors’ offices.

“Patients deserve a health care system where safety is a priority and errors are not just swept under the rug.”

In just one example, lawsuits brought by Lubin & Meyer led The Boston Globe’s Spotlight Team to expose a practice at Massachusetts General Hospital where some orthopedic surgeons would double-book operating rooms to run concurrent surgeries involving two patients in two operating rooms at the same time. As a result, in early 2016, the Massachusetts Board of Registration in Medicine overwhelmingly approved new rules to address the issue of surgeons performing simultaneous surgeries.

“Patients deserve a health care system where safety is a priority and errors are not just swept under the rug,” Meyer says. “By exposing the lack of quality treatment in these institutions, we have done our part to help create a safer environment for patients everywhere.”

While Lubin & Meyer’s leadership on patient safety issues has earned the firm nationwide recognition, it has no intention of resting on its laurels. Meyer notes that the firm is constantly refining its trial techniques through the use of mock trials, computer simulations, and other persuasive communication methods.

“Trying cases is an art for us, and we are always honing our skills because the stakes in these matters are so high,” he says. “No amount of financial recovery can ever compensate an individual or family for a catastrophic injury or the loss of a loved one, but we strive to bring some solace and comfort to those who seek our representation, and in doing so, hopefully change the system for the better."